Archive for the category “summer vacation”

Every summer, under a crisp, sunny summer sky, serious faces study programs, debate odds and circle sure winners in the racing form. There are a few minutes to post as my family mills around, each one with an ink pen at the ready. It’s our annual Uncle George Day at the horse races. This group of about 20 is focused on how to parlay two dollars into two hundred.  Everyone, that is except me. My winning ticket involves capturing this moment with one snap of my digital camera. Corralling chickens is easier. 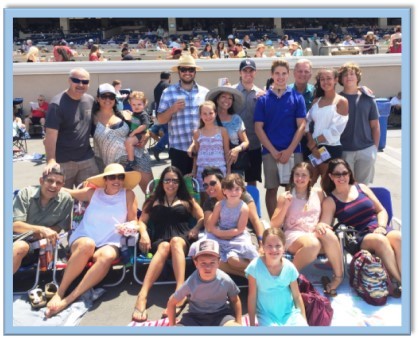 Hours earlier we set up lawn chairs and spread blankets on Del Mar’s trackside apron in preparation for a picnic of sandwiches, fruit and chips. Gathered alongside my husband, Nick, are our kids and kids by choice. Sisters, brothers, uncles, aunts, nieces, nephews, cousins and long-time friends join in the fun.  No one is interested in the future importance of photos chronicling our outing to where the turf meets the surf. More attention is paid to an over-sized bag of kettle corn propped against the cooler.

Nonetheless, I remain undaunted and perhaps a tad annoying. It’s not every day this group, spread over hundreds of miles, is together. Hoping to placate me — and have a chance to get their bets in before the windows close — people slowly shift into frame. A few even smile. I smile back as I take the picture.  “Oh, don’t move,” I say. And the voice of any of my sons replies, “We’ve got to take two.” 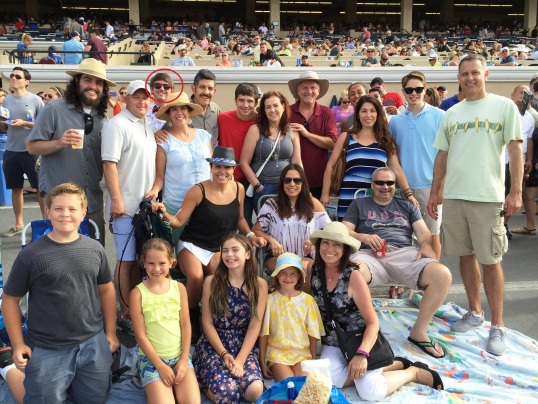 With the images safely stored on my smartphone, everyone moves to their original places. The sound of a trumpet blares in the distance. A few scurry to the betting windows, seemingly mesmerized by names like Briarpatch Betty, Countyourwinnings and Pappaspepper. The younger kids scamper toward the metal fence surrounding the track and watch the horses and their jockeys trot to the starting gate. I breathe a sigh. Another family memory captured for eternity.

My gang doesn’t realize it yet, but someday these random snapshots, converted to digital data, will become family treasure. We moms, know. That’s why many of us assume the role of family photographer/historian, with the same seamless leadership and commitment we exhibit as family party planner, nutritionist and chauffeur. And this usually means we’re not in the picture — at least most of the time. That’s a small price to pay in exchange for the satisfaction of having the images of those we love preserved on a sheet of photo paper, tucked into a family album or captured on a computer slide show. 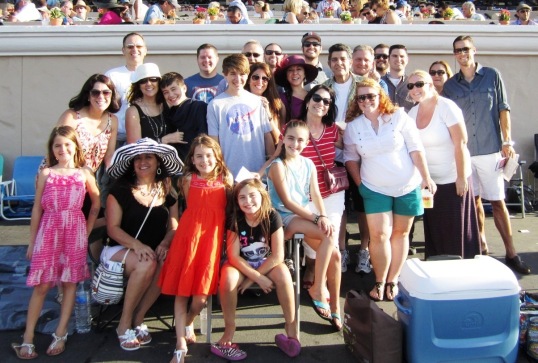 I wasn’t always a fan of digital photography. I mistrusted anything I couldn’t drop off at the drugstore for developing. It took nearly a year after receiving a digital camera for Christmas before I traded in my insecure attachment of film rolls for the convenience, efficiency and quality of a digicam. I fell in love with knowing instantaneously whether the photo was good or not. No more waiting days or weeks to find out I had blinked, someone had looked away or one of my sons (or their pals) had photo-bombed the picture.

Later that day, while everyone else gathers around the dining room table recapping their winners and losers, I sneak off to my computer to download the candid shots snapped in between races. I linger a moment and after a few mouse clicks, I open a digital slide show of other family events. One son’s first day at kindergarten, their grandmother’s 80th birthday, the sweet smile of a new bride, the joyous birth of a grandchild. It doesn’t matter where the pictures are stored — in an album, on a hard drive or at a photo sharing site. Or whether my face is among the group grinning from the image. I’m part of the moment and the emotion that only a photo can preserve.

I smile as the pictures glide past, reminding me of forgotten occasions. Like the sleepy Saturday morning I had awoken everyone early for a family portrait. The professional photographer insisted the light at Coronaod beach was best before the clouds disbursed.  Sometime around 7 a.m.  Complaints and protests — mostly Nick’s — echoed in my ears. “Why are we up earlier than the sun?” he moaned, as he and our young sons trudged barefoot through the wet sand to reach a sea wall.

Wearing rolled-up jeans and white T-shirts, our fivesome posed casually, while the photographer captured our smiles forever. It’s a great portrait. And that time, I was in the picture.

“We’re out of toothpaste,” my husband Nick shouted from another room. “Which list do I write that on?”

“The purple one,” I replied.

I’ve learned the best bargains on sundries and non-perishables are at a discount chain. I get fresh fruits and veggies from a health food market and everything else from the neighborhood grocery store. So there are three pre-printed lists hanging in my pantry – color-coded, of course.

I can’t take full credit for this idea. My long-time friend Arlene unintentionally introduced me to the concept years ago during a lunch break. Peering over my turkey sandwich, I spied her preparing an after-work shopping strategy.

“Is your list printed?” I asked, unable to hide my surprise.

She laughed. “Yeah, I got tired of writing the same things over and over, so I typed a list and made copies.” She handed me a sample. Dish soap, shampoo, dog food, TP. Arlene’s system was simple — checkmark the items that were running low.

I naively adopted her blueprint, expecting Nick and when they were still living at home, my sons, to embrace the system. I dreamt that, after taking the last of the something, those living under this roof would circle the item on the list, sending a clear signal to replenish the chocolate syrup, tortilla chips or mouthwash. It didn’t take long for Claire-the-realist to propose a compromise — leave the empty “whatever” on the counter. Code for “I took the last one.” 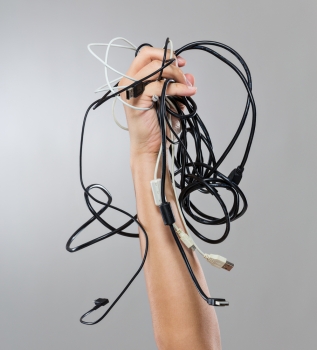 Living in the digital age, we’re inundated with hundreds of list applications to keep track of groceries and home supplies. Still, I prefer the feel of a pen and the crinkle of paper. I love my smartphone as much as the next gal. I’ve downloaded a whopping 47 apps. At the tap of a fingertip, I can tag a song, play word games or check the status of my delayed flight. Occasionally I use the device to make phone calls.

Apps are convenient and amazing, but I’ve trusted my reminders to a pencil and a spiral notebook for decades. The time it takes to move a ballpoint pen across the page allows my thoughts to crystallize. Plucking at a keyboard or poking a touch screen isn’t the same. Besides, paper’s battery never dies and even a dull pencil writes.

I was reminded of the benefits of simplified communication on a late summer afternoon, a few years ago. While I prepared for an expanded version of my monthly book club, an unusual quiet blanketed my house. The gentle buzz of the water cooler silenced. Ice cubes didn’t drop in the freezer. No digital read-out reminded me there’s two hours left to chill the white wine. After a bit of investigating, I learned a power line was inadvertently tripped and parts of Southern California and Arizona were left without electricity.

I had limited time to notify the usual group of eight, now expanded to about 30 because a local author wrote that month’s selection, that without air conditioning and illumination the meeting was cancelled. My cell phone didn’t connect. No Internet access, either. Twitter worked for awhile, but I knew my group of friends wouldn’t be checking my tweets. I could alert those within walking distance by knocking on doors, but shoe leather was impractical for friends living miles way. Fortunately, mounted on my kitchen wall was an operating telephone. I dialed a few other traditionalists who still used landlines and asked them to spread the word.

The hot weather made staying inside uncomfortable, so while my son, Seth, barbecued already defrosting hamburgers, husband Nick and son Jake dragged a couple tables and chairs to the driveway. Neighbors, rolling coolers filled with ice and carrying goodies originally intended for book clubbers, joined us for an unplugged evening. Conversations flowed and it was hours before the glow of candles dotting the tables faded and flashlights began to dim.

An accidental blackout turned into an impromptu block party for adults, teenagers and kids who happen to live side-by-side. We savored this unscheduled break from laundry, homework and economic woes. There was no fretting about what dish to bring or what clothes to wear and plenty of the time to enjoy life off the grid.

Human error caused that evening’s blackout, giving us an unexpected break. Before summer ends, let’s reenact a “lights out night” and relax under a star-dusted sky with neighbors and friends. We can switch off, power down and unplug everything–except the fridge.

Better stock up on matches, candles and flashlight batteries. Guess I’ll add those items to the yellow shopping list. Or is it the purple one?

What I’ll Do On My Summer Vacation

Summer is the best time for vacation. Daylight lingers, delighting us with sun-soaked rays. My husband, Nick and I stick to this timetable, although it’s not every 12 months we can afford to pack up and caravan to a distant place. Big vacations are sprinkled in whenever we can swing them.

Even though we budget, often our travel plans put us in the red. Nick and I don’t mind. We know memories are worth more than hefty bank accounts. Past summers have been spent horseback riding in Kauai, boating on Lake Tahoe or rafting down the American River in Sacramento. My family has picnicked near the Golden Gate Bridge, taken a cruise to the Bahamas and trekked to Pittsburgh for a family reunion. We have photos of us in front of the Liberty Bell, the St. Louis Arch and the Statue of Liberty.

But more often than not, we staycation, devising our own (reasonably priced) entertainment. In spite of financial reality, I’m not quite ready to do away with family vacations all together. There are a few places I’d like to see  before the days get shorter – Washington, D.C. and the Grand Canyon to name two. But in between the major getaways, there are still plenty of ways to enjoy the lazy, crazy, hazy days of summer. So, before it’s time to turn the clocks back, I’m hoping to:

Sharing little pieces of me with you.

...because every author wants to feel like a goddess!

Sharing my learnings of being a mother

about the craft and business of fiction

Writers In The Storm

A Blog On Writing

△ empowering people with the ideas, tools and resources they need to thrive △

A San Diego based critique group for professional and aspiring writers

I write for the sake of meaning something to someone, somewhere and for my sanity.