My husband, Nick and I have lots in common. We share the same religion. We’re voting for the same candidate for president. Jeopardy and Blue Bloods are must-see TV. We parent three adult sons and spoil a beautiful granddaughter together.  For sure, he’s the man I want bringing me a bouquet of roses and a box of chocolates on February 14.

But over the years, I’ve noticed that our personalities collide, a lot. Nick likes westerns. I prefer comedies. I’m a diehard Steelers’ fan. He’s Bolts all the way. My car radio is set to R&B, his to classic rock. I like cake. He’ll take pie.

Nick was born in Newark and I’m from a little town near Pittsburgh. I used to wonder if that was the root of our differences. Then I thought, maybe it’s because I’m the youngest of four and Nick is the seventh of nine. Or perhaps it’s because I have brown eyes and his are blue. But the realization of a simpler answer trumped my earlier theories — men and women are different. When I was playing with Barbies, Nick was setting up his Hot Wheels track. When he was being introduced to Barbasol, I was learning about mascara. 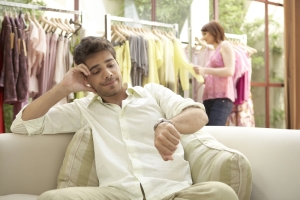 About three weeks ago, our contrasting preferences became even more apparent when I invited him to go shopping at the mall. I figured that our trip would take up most of Saturday afternoon and part of the evening. Nick was planning on a 30-minute outing (travel time included).

Not only do Pinks and Blues clash when it comes to how long a shopping trip takes, we’re oceans apart about what we want to shop for. Ogling the latest in barbecue accessories or scoping out bug spray in Home Depot is Nick’s idea of the ultimate buying expedition.

For me the mark a successful mall visit is finding the perfect pair of shoes – no matter how long it takes. Before I became a wife I thought that everyone loved shoe shopping. Nick has since taught me that if you circle Male instead of Female on credit applications, you probably don’t consider footwear as a personal fashion statement.

About an hour later, from across the winter boots display, my husband sent a pained look my way. I was veering into the purse department. Of course there was a basketball (football, baseball, soccer, golf, hockey, curling, bowling) game waiting for him on TV at home  and I suspected that he’d rather be watching a 6-foot-6 dude take 3-point-shots instead of discussing the merits of pebbled leather. Or giving his opinion about which looks better, the hobo bag or the tote? What he really wanted to say is: “Don’t you have a dozen purses in the closet already? Pick one of these and let’s get home before the third quarter ends.”

Men and women are on shaky ground when it comes to problem solving too. Women understand that sometimes all you need is a listener who nods supportively and mutters “Hmmmm” at suitable intervals. Just because we pose the question, doesn’t mean we’re looking for the answer. Men, on the other hand, are programmed to fix things — here’s the problem, here’s the solution, end of story.

This is where my husband shows his royal blue streak. His problem-solution skills are right up there with some of the greatest minds of his gender — Einstein, FDR, Knute Rockne. But after this short discussion outside the dressing room, Nick won’t be so quick with the answers anymore:

“Boy, I don’t like the way these pants look,” I said modeling them for him.

“They are a little tight,” Nick observed. “How’s your diet going?”

“Slowly. Why are you asking?”

“Because you said you didn’t like the way your pants fit.  You could always do what your friend did and try liposuction.”

“I didn’t say they didn’t fit. I said I didn’t like how they looked. I don’t like this khaki color.”

I’ll leave you to imagine the rest of conversation, but you can be sure that Nick will never again suggest liposuction to his bride. In his spare time, he’s now practicing variations of: “Claire, you look fabulous in whatever you wear.”

It’s true that I might be from Venus and sometimes Nick wishes he was on Mars, but after many years of marriage, we’re proof that opposites attract. It may be a girl thing and it might be a guy thing. But one thing’s for sure – thanks to an odd-colored pair of Capri pants, come next Valentine’s Day I’ll be getting a larger bouquet of roses. And that box of chocolates I told you about earlier, it’s certain to be a three-pounder.

Sharing little pieces of me with you.

...because every author wants to feel like a goddess!

Your All American Housewife With A Spooky Twist

Sharing my learnings of being a mother

about the craft and business of fiction

Writers In The Storm

A Blog On Writing

A San Diego based critique group for professional and aspiring writers